Sunday, April 10, 2011 at 8:39am
The week or so that followed was one of confusion and chaos and a feeling of total helplessness. There was very little information -just word of mouth- since there was no electricity or power for several days following the quake; there was no TV, no phone, no radio without batteries, no stores open to buy them or anything, no newspapers, and worst of all no water.

We borrowed candles. For 4 days we wore coats and hats and gloves in bed as temperatures were below freezing. We kept warm in the day by walking and/or wrapping ourselves in blankets. It snowed. We collected snow in buckets to wash with as it melted..which took a long time. We ate what was left in the freezer and was starting to defrost..

On the fourth night after the quake we heard news that electricity was back on in one part of Sendai. We waited for our area to get power back and watched from the balcony as different parts of town lit up as power came back in those areas. At midnight on the 15th our house suddenly gurgled and bleeped back to life. The fish tank filters bubbled, the lights came on..the TV on my cell worked...still no internet.. and phone connection was random.

The days that followed were taken up with lining up for food. Some days this was a 2 or 3 hour wait in snow or rain, bitterly cold, to get our allocated 10 items. Only dry foods and dry goods available. Some days the store had sold out before you made it to the front of the line. Other days were better, you lucked upon a small fruit and vegetable shop that still had fresh food...every day we lined up for water 2 liters each..and hauled it back up the hill. No gasolene, people walking everywhere like we had stepped back in time.

The situation in Fukushima started to become clear. People were panicking. Many, many foreigners left Japan and Narita airport was flooded, all planes out booked for days and long waiting lists for cancellations.

I wondered what to do..how long this would continue..how long we could continue to remain strong in spite of knowing we were the lucky ones and thousands had lost their lives and homes in the tsunami, we were starting to feel overwhelmed. Neighbors were suffering, becoming depressed and weary, the kids school had closed down indefinitely, my work and business everywhere in the area was postponed...still is.

We decided to go to Tokyo.
Everything sounded so much better there. They had food and water. There were no lines.

It was hard to get a bus out. We had to wait for hours and then book ahead. No trains in and out of Sendai as all the lines were buckled and wrecked in the quake. They say it will take months and months to repair them.


Lining up for food and water rations. 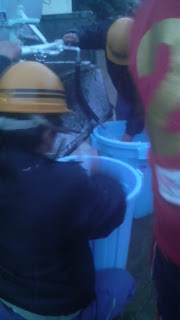 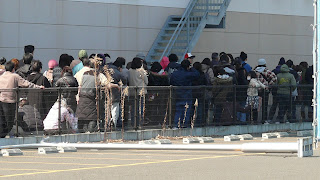